I always suspected that many Australians were racial. The way many Indians are casteist.

Sure, the official Indian delegation again blocked all mention of caste at the UN conference against racism in Durban in April 2009. But we all know they are the same.

e-Media in India are reporting every single violence against any non-white immigrant in Australia. The Asian Age reports on June 3, 2009: “Crimes against Dalits on the rise across country. A total of 06,942 incidents of murder, rape and other crimes were reported in 2008 in UP.”

Let us leave India out at the moment.

Will Australians stand up against this hate in their country?

I am counting on Ian Chappell, the best cricket commentator by some distance for my taste.

In Ashley Mallett’s book “Chappelli Speaks Out” (2005), there is a chapter titled “Tampa and the 1968 Australians.” It talks about Chappell’s involvement in social causes such as the campaign against refugee detention centres.

“Anyhow, I'm living this reasonably quiet life and suddenly the 'Tampa' crisis had blown up. I'm sitting there in front of the television news and watching all those people on the 'Tampa', and I'm thinking, "This is terrible. "No matter what you think about protecting the Australian borders, these are human beings and you can't just treat them like that .I was getting really angry.

The games that I've played in my life are very good tutors in teaching you what is fair and what is unfair. And that was offended by what I saw with the Tampa crisis. I just thought, That's not fair. In cricketing parlance, it was like cheating -that I felt that those people, the refugees, were being cheated out of a fair go. Anyhow, I'm railing at the television set, and my wife, Barbara-Ann, she said, You know, bad things happen when good people do nothing. And that sort of jolted me a little bit. I thought, "I'm not gonna do a lot of good sitting railing at the television set…” 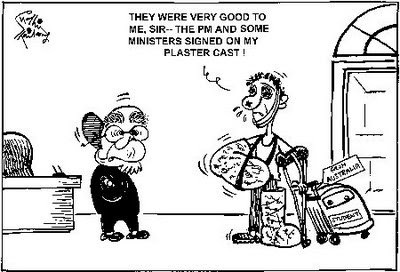