“Fed Shrugged” by Ayn Rand- Nearly Perfect in its Immorality

"Alan Greenspan, the former Federal Reserve chairman, said on Thursday the credit crisis had exceeded anything he had imagined and admitted he was wrong to think that banks would protect themselves from financial market chaos."

In 1984, my first job with corporate India was at the then most fashionable now almost-extinct multi-national.

Along came the company of some pretty girls. There was just one problem. Most of them were very fond of Ayn Rand and I didn’t know who Ms. Rand was.

“…Despite repeated interest rate cuts, which eventually brought the federal funds rate down to just 1 percent, the unemployment rate just kept on rising; it was more than two years before the job picture started to improve. And when a convincing recovery finally did come, it was only because Alan Greenspan had managed to replace the technology bubble with a housing bubble…”

Housing-bubble fame Alan Greenspan is a disciple of Ms. Rand.

“…So where were the regulators as one of the greatest financial disasters since the Great Depression unfolded? They were blinded by ideology.

“Fed shrugged as subprime crisis spread,” was the headline on a New York Times report on the failure of regulators to regulate. This may have been a discreet dig at Mr. Greenspan’s history as a disciple of Ayn Rand, the high priestess of unfettered capitalism known for her novel “Atlas Shrugged.”

In a 1963 essay for Ms. Rand’s newsletter, Mr. Greenspan dismissed as a “collectivist” myth the idea that businessmen, left to their own devices, “would attempt to sell unsafe food and drugs, fraudulent securities, and shoddy buildings.” On the contrary, he declared, “it is in the self-interest of every businessman to have a reputation for honest dealings and a quality product.”

It’s no wonder, then, that he brushed off warnings about deceptive lending practices, including those of Edward M. Gramlich, a member of the Federal Reserve board. In Mr. Greenspan’s world, predatory lending — like attempts to sell consumers poison toys and tainted seafood — just doesn’t happen…”

“…Shortly after “Atlas Shrugged” was published in 1957, Mr. Greenspan wrote a letter to The New York Times to counter a critic’s comment that “the book was written out of hate.” Mr. Greenspan wrote: “ ‘Atlas Shrugged’ is a celebration of life and happiness. Justice is unrelenting. Creative individuals and undeviating purpose and rationality achieve joy and fulfillment. Parasites who persistently avoid either purpose or reason perish as they should...”

Gore Vidal has described Atlas Shrugged’s philosophy as “nearly perfect in its immorality.” 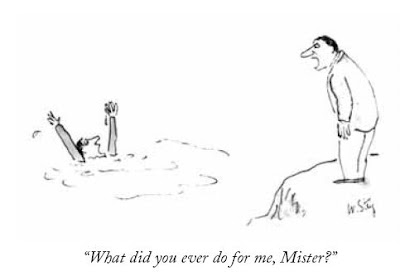