Animal Farms of Maharashtra: Hunting in the Name of Gyanba’s Marathi

I consider myself lucky that after spending almost 11 years outside Maharashtra- else where in India- I came back with 5 medals- to put in the words of a US veteran of Iwo Jima: Two Hands, Two Legs and a Head.

Although I didn't speak any of their languages, Tamilians, Bengalis, Assamese (including ULFA), Kannadigas and numerous other language speakers I met did not kill me.

Not just that, most of them were very kind to me. Suckers!

Of course being a Brahmin in today's Maharashtra, I still run a considerable risk of getting hurt in the name of caste. 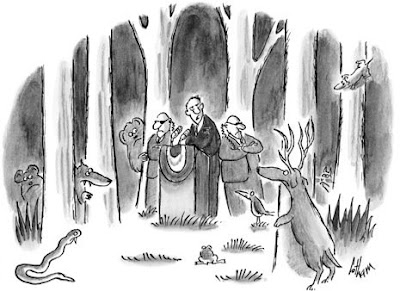 “Don’t be afraid. I am Chief Minister of Maharashtra. I know you are totally helpless, defenseless in front of armed goons roaming the streets of our major cities, trying to kill you in the name of Marathi. I also know it’s my constitutional duty to protect you…But er…since you stay in Maharashtra, shouldn’t you all be speaking Marathi?”
Posted by Aniruddha G. Kulkarni at 9:00 AM

It is disheartening, heartbreaking, in fact, to see ordinary Maharashtrians justifying and rationalising Raj Thackeray's campaign. The irony of it is that most middle/upper middle class Maharashtrians who support his campaign have a relative who is working abroad and almost all the arguments presented by Thackarey against Bihari's/UPites apply to their kin. It pains me no end to see no strong voice from academia, literature, politics or civil society condemning this in the strongest possible language. This makes me empathise with Muslims in India who are constantly pilloried for not protesting against terrorism strong enough. The feeling of impotence against a sweep of an ideology that 'speaks for' your language/caste/religion as is unbearable.

Anyways, no point in lamenting. I am however curious as to why you added the getting hurt as a Brahmin part to your post. That somehow seems incongruent and orthogonal to the point of the post. Would you care to explain?

They have burnt and killed in the name of caste in the past and they will do so again. '1948' happened only 60 years ago.

Samarth Ramdas/ Dadoji Kondev/ Bori-vandalism controversies are symptoms of a cancer that refuses to go away.

All minorities are a 'fair game' in today's India and 'progressive' Maharashtra.

I am get lucky though but not my son. Or not his duaghter. Or not her daughter...

I think you are exaggerating. This is like VT Rajshekhar of Dalit Voice comparing Jews and Brahmins. What happened in 1948, mostly in Kolhapur and other parts of Maharashtra in light of Gandhi's assasination was lamentable. However, to assume denouncing of Ramdas, BORI vandalism portend similar attacks on Brahmins falls in the realm of fantastical, in my opinion.

I hope you are right and I am wrong.