I like my Vertigo. More so after reading Francois Truffaut.

Times of India, July 11 2008:
“Incidence of vertigo highest in 36-60 age group…sedentary urban lifestyle, stress and lack of exercise are factors contributing to the growing trend of vertigo in the youth…”

Although “sedentary urban lifestyle, stress and lack of exercise” don’t strictly apply to me, I suffer from mild vertigo/ acrophobia.

In fact, I think I tend to enjoy it.

I wonder if this “perverse” enjoyment has anything to do with my favourite movie Alfred Hitchcock’s “Vertigo”. First time I saw it was in early 1980’s in Mumbai (at Sterling cinema?). I enjoyed every minute of it.

Later I read and keep reading masterly “Hitchcock (revised edition” by Francois Truffaut with the collaboration of Helen G. Scott (first published in 1967).

“…To put it plainly, the man (Scottie Ferguson played by James Stewart) wants to go to bed with a woman who’s dead; he is indulging in a form of necrophilia…

When you see Judy (played by Kim Novak) walking on the street, the tawny hair and make-up convey an animal like sensuality. That quality is accentuated, I suppose, by the fact that she wears no brassiere…That’s right, she doesn’t waer a brassiere. As a matter of fact, she’s particularly proud of that!”

I knew part of the reason why I liked the movie so much! 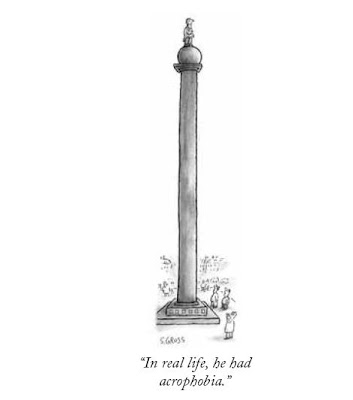