To India Goes the Award for the Most Celebrity Obsessed Culture

I couldn’t watch academy awards function this year after an hour. It got so boring.

I never watch any Indian film award function. At last count there at least are a dozen of them. This year even my wife doesn’t wish to watch any of them. They all look the same...muck like gowns at academy awards function...parade of celebrities. Rate at which Indian media are busy fabricating celebrities is scary.

“…I’m only slightly ashamed to admit that I found myself hoping that the strike (the Writers Guild strike) would shut the Academy Awards down; that for once, in a year of such cinematic bounty and variety, appreciation for the best movies could be liberated from the pomp and tedium of Hollywood spectacle. ..

… So I am not against the Oscars, any more than I’m dismissive of the Salesman of the Year or the Employee of the Month, or opposed to lavish annual trade association conventions for actuaries or ophthalmologists. But I am nonetheless bothered by the disproportionate importance that the Academy Awards have taken on, and by the distorting influence they exercise over the way we make, market and see movies in this country. The Oscars themselves may be harmless fun, but the idea that they matter is as dangerous as it is ridiculous. ..

… In the past it was frequently safe to assume that any relationship between the Oscars and artistic quality was coincidental. The academy was never supposed to be hip, daring or responsive to what was newest and most risky in the world of cinema. It was just what its name implied: the mainstream, the establishment, the old guard. Sometimes, yes, the best picture prize would actually go to the best picture, but more often the academy’s neglect of a film was a reliable index of its merit. The good judgment not only of critics but, more important, of independent-minded, adventurous moviegoers has traditionally been measured by its distance from the consensus of the movie industry.

And that, it should not be forgotten, is what the Academy Awards represent: the self-assessment of a self-interested, self-involved professional clique…

… In the old days it was more often the opposite: the academy would belatedly gild the lily of commercial success with a shiny finish of ersatz class. This vulgarity was the saving grace of the Oscars. It was not necessary for film lovers to take them seriously or for media outlets to cover them like presidential campaigns, with horse-race reporting, sober analysis and war room spin doctoring. A bit of perspective is needed. The wonderful thing about the Academy Awards is that they are fundamentally trivial. To pretend otherwise is to trivialize movies.” 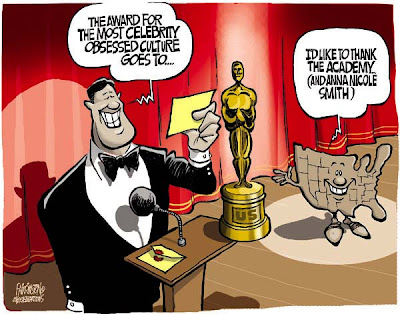 Posted by Aniruddha G. Kulkarni at 5:30 AM

I don't share your scepticism regarding the Oscars. The way I see it is that it acts as a filter. Assuming that my time is precious, they do make me aware of the good movies that are available out there. The awards spare me the investment of time and money to watch a lot of films released each year. Even considering the fact that the 'best' movies rarely win an Oscar, the nominations receive equally wide publicity for me to want to watch them.

Criticism of the academy is very much like criticising the Booker/Nobel prize. Yes, they are biased/politically motivated and so on and so forth but still in a market filled with so many good authors I do rely on them for pointers. That the winner's advance for their next novel becomes news item reported in glowing terms in Indian media is merely a side effect or a nuisance that I am happy dealing with rather than reading 40 new novels per year or watching equivalent number of movies and realising that only 20% of them were worthwhile.

And yes, I do share your concern about celebrity obsession of the India media. However, having been in journalism for a while I look at it as a necessary evil. Sort of like advertisements, where you can ignore the items you want for the price of reading one very good insightful article. For instance I would buy Times of India Pune for solely its Sunday Times op-eds by Aiyar, Karkaria, Suraiya and Dasgupta and for local news articles by Abhijit Atre and Abhay Viadya despite columns by the likes of Shobhaa De and Tarun Vijay and the local feature columns of Pune Times supplement.

So yes, let the kitsch thrive so long as it lets me afford a glimpse of a genius.

For last few years, I am deeply disappointed with quality of most American and Indian films.

Mainstream media- I have already given up!

I am an anarchist anyway.