White King Vs Red Queen: 1972 Regressed the Cause of Chess

It was the first occasion in the 20th century when chess fired the public imagination. It surely did.

12 year old I caught the chess fever. It almost drove me crazy.

It's so easy to relate to antics of Bobby Fischer (described below) after reading Kolhatkar!

In 1972 at Reykjavík, Iceland, from July through September 1972, Bobby Fischer and Boris Spassky fought to become world chess champion.

The championship was covered in Marathi newspaper, Maharashtra Times महाराष्ट्र टाइम्स, extensively. That is to say as much as cricket. All the moves of every game were printed and commented on.

I haven’t seen such coverage of any chess tournament, save perhaps Kasparov-Anand PCA World Championship 1995, in any Marathi publication since then.

Daniel Johnson has written a new book on this: “White King and Red Queen: How the Cold War Was Fought on the Chessboard”.

Raymond Keene , The Spectator, December 8, 2007 says: “Daniel Johnson’s excellent new book agrees with me that Fischer’s victory in the World Championship in 1972 might actually have regressed the cause of chess, in spite of the great publicity achieved. Those in the know always suspected that the eccentric Fischer would virtually withdraw from chess were he to win the championship, and this is indeed what transpired.”

“…For Fischer the showdown at Reykjavik committed 'the free world against the lying, cheating, hypocritical Russians'. Richard Nixon agreed, sending Fisher his 'personal congratulations' and assuring him that 'I will be rooting for you'. Henry Kissinger also put in a call. 'America wants you to go over there to beat the Russians', he told Fischer.

Fischer did beat the Russians - though as much by gamesmanship as by genius. He failed to show up for more than week and then deliberately turned up late for the rescheduled opening match. He insisted that the chairs, the chessboard, and the lighting were all changed, that the TV cameras be banished, and that a game be played in a back room away from the spectators. At one point he started shouting in the middle of a match and had to be restrained. Fischer's antics, observed Garry Kasparov, who would, a decade later, be the greatest of all chess champions, 'broke Spassky'…

…'The Cold War was the first war caused and dominated by intellectuals and it was best symbolised by the game of the intellectuals'. Fischer-Spassky 'was the Cold War's supreme work of art', embodying 'abstract purism, incipient paranoia, sublimated homicide'…

…At the same time, in his headlong rush to convict Moscow, Johnson ignores the extent to which the West itself played the ideological game, manipulating everything from the space race to sports tournaments for political ends…

… Chess, as Johnson himself points out, 'makes a good allegory, but a bad teacher'.”

Indeed Fischer was a bad teacher as kids below prove! 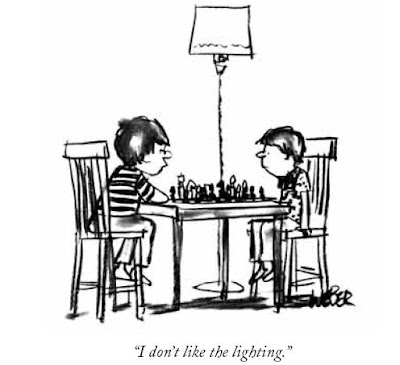