Key to unravel great minds and their work often is to know what drove them - personalities, events etc.

He was obsessed with Mastani and deeply influenced by Whistler.

“an American-born, British-based painter and etcher. Averse to sentimentality in painting, he was a leading proponent of the credo "art for art's sake". He took to signing his paintings with a stylized butterfly, possessing a long stinger for a tail. The symbol was apt, for Whistler's art was characterized by a subtle delicacy, in contrast to his combative public persona. Finding a parallel between painting and music, Whistler titled many of his works 'harmonies' and 'arrangements'.”

I think most of it fits Godse too.

“Averse to sentimentality in art…art for art's sake… possessing a long stinger for a tail.. art was characterized by a subtle delicacy, in contrast to his combative public persona…”

“The Gentle Art Of Making Enemies” is a book by Whistler published in 1890. The book contains Whistler's letters to newspapers chronicling his many petty grievances against various acquaintances and friends.

Godse too could have written a book with the same title!

Thanks to poverty of Marathi publishing world, the book containing these essays is not well printed and has NO pictures, except the one on the cover (reproduced below left). 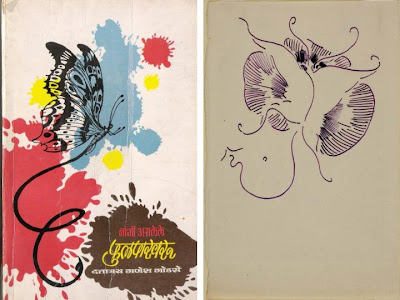 First time perhaps they appear together!
Posted by Aniruddha G. Kulkarni at 8:45 AM

Dear Aniruddha,
I found one old article in Sadhana dated 19th Feb 1983 on Bamboo Plant, wriiten by Aniruddha Kulkarni. Are you same A.K.? It was an excellant article.

Sorry Nikheel. That's not me.

Thanks for writing this.