Dalits & Slaves as Stock Options in Our Celebrated and Mythologized History

Two of the sorriest chapters in human history are the practices of slavery and caste.

20th century Maharashtra produced some good books on the suffering of Dalits. But more needs to be researched and told. People need to know what it was to be a Dalit even in 19th century India.

Markus Rediker has written a book “The Slave Ship” reviewed by Adam Hochschild, author of “Bury the Chains: Prophets and Rebels in the Fight to Free an Empire’s Slaves”.

.” Most spasms of cruelty in history we know about largely through the testimony of victims. It is thanks to acts of witness by survivors like Primo Levi and Alexander Solzhenitsyn, for instance, that we can begin to picture what life was like in Auschwitz and the gulag. There is no great trove of memoirs by retired concentration camp guards.

By contrast, a much more prolonged bout of suffering, the notorious Middle Passage across the Atlantic, on which more than 12 million Africans were embarked for the Americas over more than three centuries, we know about almost entirely from the perpetrators. There are few accounts of this voyage by slaves…

Just as corporate officers now get stock options, slave-ship officers received the extra compensation of a few “privilege” slaves they were permitted to buy, transport and sell for their own profit. Sometimes there were executive bonuses tied directly to performance, based on the number of slaves delivered.

And finally, those who succeeded in the business could seamlessly make the transition to politics, the way tycoons still do: former slave-ship captains sat in both the British House of Commons and the United States Senate (James D’Wolf of Rhode Island).

This complex tissue of normality makes one wonder what aspects of our own everyday business-as-usual people will, a century or two from now, be considered as horrendous as we think the slave trade was…

Humanly, the slave ship was the locus of unbelievable cruelty. To punish rebels, captains resorted to thumbscrews, red-hot pokers, strangling, the severing of limbs and more. Like the post of concentration-camp commandant, the job bred violence…

Violence cascaded downward from captain and officers to sailors to the enslaved. The slaves got the worst of it…”

In his own books, Adam Hochschild says:

"So rapidly were slaves worked to death, above all on the brutal sugar plantations of the Caribbean, that between 1660 and 1807, ships brought well over three times as many Africans across the ocean to British colonies as they did Europeans. And, of course, it was not just to British territories that slaves were sent. From Senegal to Virginia, Sierra Leone to Charleston, the Niger delta to Cuba, Angola to Brazil, and on dozens upon dozens of crisscrossing paths taken by thousands of vessels, the Atlantic was a vast conveyor belt to early death in the fields of an immense swath of plantations that stretched from Baltimore to Rio de Janeiro and beyond…

The world we live in -- its divisions and conflicts, its widening gap between rich and poor, its seemingly inexplicable outbursts of violence -- is shaped far less by what we celebrate and mythologize than by the painful events we try to forget.”

John Hawkyns has said:”…slavery did change the world. Millions of people were deracinated. Whole economies and empires were birthed and borne on the backs of kidnapped Africans. The development of the African continent itself was irreparably arrested as a result of the stolen legacies of its strongest people. So we are still dealing with the dreadful aftermath even today.”

If you look at our celebrated and mythologized history from the eyes of slaves and Dalits, the Pharaoh was nice only if he built small Pyramid because it meant little less flogging and torture! 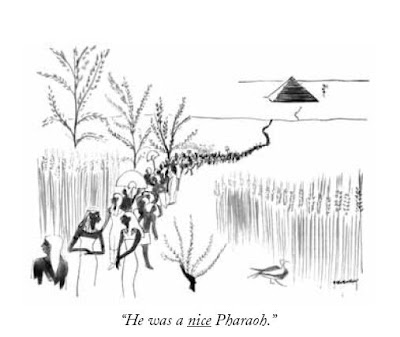