A Barber who Shaves you in Silence, without Drawing a Word from your Mouth or sharing any Gossip, and Cursing no one, is not a Barber at all

Guardian September 1, 2007 has reviewed Orhan Pamuk's “Other Colours: Essays and a Story”.

I was delighted to read Pamuk dwelling at length on barbers of Istanbul because my own relationship with barbers has been exciting. In early years of growing up, I hated their sight but since then I have always been aroused at the thought of visiting them. Indian films, particularly Marathi ones, have always portrayed barbers in all their colours.

Pamuk says: “…In those days Istanbul boasted many humour magazines, of which Vulture was the most distinguished; because their embroideries of news and enlargements of urban myths offered the fullest expression of this spirit of resistance, they were available in all barber shops of my childhood. Today, there is always a television blaring, drowning out older channels of communication and so greatly reducing the power of gossip and resistance in the city's coffee houses and barber shops; it should not come as a surprise that, with the advent of television, the golden age of Istanbul's humour magazines, which once enjoyed a combined circulation close to a million, also came to an end. (Years later, when I went to a barber shop in New York and saw that the men waiting to be served were given not a humour magazine but a copy of Playboy, I was not terribly surprised.) …….

When I was a boy waiting my turn at the barber shop, flicking through the pages of Vulture, stopping now and again to study locally drawn caricatures of citizens aghast at the prices of things, enjoying jokes about bosses and their secretaries, stories by the popular humorist Aziz Nesin, and cartoons lifted from western magazines, my ears were always alert to the conversations around me. Of course the topic discussed at the greatest length was football and the football pools. Some, like Toto, the head barber, would, as he moved among the three customers in the three chairs, offer up his thoughts on boxing or the horses, which he played from time to time. His barber shop, which bore the fanciful name Venus, was at the end of the passageway across the street from our house in Nisantasi. Toto was a tired and sulky man with white hair, and the other of the two older owners was irritable and bald, while the third owner was in his 40s and sported a thin Douglas Fairbanks moustache. I remember he was less interested in chatting with his customers about high prices, new shops in the neighbourhood, singers and stars of the day or domestic politics than he was in discussing international affairs and the state of the world…

… Once, after a customer had had his shave, taken off his apron, allowed the boy to comb his hair, given out his tips, and left the shop, the Fairbanks moustache-sporting owner, who had shown him such courtesy and deference only moments earlier, began to curse this man's mother and his wife: this was how I discovered that the adult world was populated by duplicitous types whose anger was deeper than anything I had known in my child's world. At the barber shops of my childhood, they used scissors, huge clippers they would angrily toss away when they didn't cut well, combs, cotton balls to keep hair out of the ears, cologne, powder and, for the grown-ups, cutthroat razors, shaving cream, shaving combs and white aprons. Today, apart from a handful of electric appliances - like the hair dryer - the tools have not changed much, and this must remind us that though Istanbul writers have never recorded their traditions, these barbers (who have been using these tools for centuries, gossiping as they work) must have been speaking in the same way for just as long…

Barbers also performed circumcisions and other small surgical procedures, some in their coffee houses and others in separate establishments: this gave them a central importance in Istanbul society..

That was when I understood that a barber who shaves you in silence, without drawing a word from your mouth or sharing any neighbourhood or political gossip, and cursing no one, is not a barber at all.“

At Miraj, until I turned nine or ten, Gangaram Gaikwad would visit our home to give us a crew cut. Later it was our turn to visit him once a month. Gangaram was a dapper looking young man who looked less of a barber and more of a photographer or a tailor. Gangaram’s shop, run jointly with his grim looking elder brother (he looked like a guy on the left in picture below), used to be always crowded and, even if it wasn’t, elders always jumped the queue to push us back. I remember some times it used to take hours to get the job done.

But all along Gangaram never stopped smiling, Radio Ceylon hummed and local gossip sizzled. I remember the late Vasant Pawar’s (one of the most talented music director of Marathi film industry who died young) Muslim female “consort” used to frequent the place to chat up with Gaikwad brothers and their clients.

For our monthly visit, we were incentivised with a rupee or two to buy peanuts for our return journey but I guess the real incentive was spending time at Gangaram’s shop, listening to adult gossip! 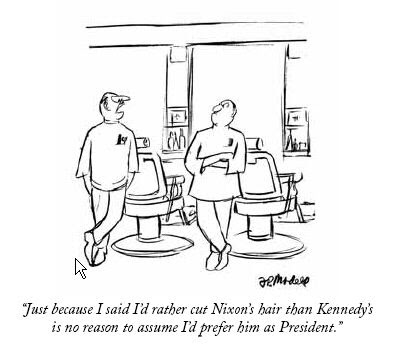