“SIXTY YEARS AGO today, Harry Truman went before a joint session of Congress to announce what became known as the Truman Doctrine. "At the present moment in world history, nearly every nation must choose between alternative ways of life."

With that, an era of bipolarity was inaugurated, dividing the world between forces of good and evil.

The speech amounted, as one of Truman's advisers characterized it, to a declaration of religious war. In the transcendent struggle between Moscow and Washington, "nonalignment" was not an option. Truman declared that the United States would actively support "free" people anywhere who were resisting either internal or external threats to that freedom. The "free world" was born, but so, eventually, were disastrous wars in Korea and Vietnam.

The occasion of Truman's pronouncement was his decision to militarily support one side in the civil war in Greece, and with that, the deadly precedent of American intervention in foreign civil wars was set. Fear of communism became a driving force of politics and a justification for vast military expenditures…….”

Gore Vidal is one of the sanest American voice still occasionally heard.

When he was asked if cold war was complete illusion, he said : “ No, it was a complete fact. But it was based on an illusion that the Russians were coming. This was the propaganda that never ever let up, until finally Gorbachev dissolved the whole story. We had maintained the myth in order to keep 51% of the US budget for a military which has no enemy. “

Many conversations were ruined by the very mention of it! 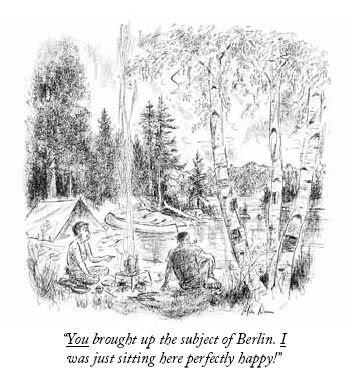