"How barren is my soul and thought, and yet incessantly tormented by vacuous, rapturous and agonizing birth pangs! Is my spirit to be forever tongue-tied? Must I always babble? What I need is a voice as penetrating as the glance of Lynceus, terrifying as the sigh of the giants, persistent as a sound of nature, mocking as a frost-chilled gust of wind, malicious as Echo’s callous scorn, with a compass from the deepest bass to the most melting chest-notes, modulating from the whisper of gentle holiness to the violent fury of rage. That is what I need to get air, to give expression to what is on my mind, to stir the bowels of my wrath and of my sympathy. – But my voice is only hoarse like the cry of a gull, or dying away like the blessing upon the lips of the dumb."  (trans. Alastair Hannay, 1992)


"Every line I have ever written and every lecture I have ever delivered seems to me of very little or no value."


"...I don’t think longevity affects the relationship with output, either. I doubt that Wordsworth at the end of his long life was more satisfied with his body of work than was Keats, at the end of his short one. In a way, all writing is essay writing, an endless attempt at finding beauty in horror, nobility in want — an effort to punish, reward and love all things human that naturally resist punishments, rewards and love. It is an arduous and thankless exercise, not unlike faith in God. Sometimes, when you are in the act of writing, you feel part of a preordained plan, someone else’s design. That someone else might as well be God. And then one day you rear back and survey everything you have done, and think, Is this all God had in mind? But it’s all you got."


The literary critic Marjorie Perloff has recently begun using the term unoriginal genius to describe this tendency emerging in literature. Her idea is that, because of changes brought on by technology and the Internet, our notion of genius—a romantic isolated figure—is outdated. An updated notion of genius would have to center around one’s mastery of information and its dissemination. Perloff has coined a term, moving information, to signify both the act of pushing language around as well as the act of being emotionally moved by that process. She posits that today’s writer resembles more a programmer than a tortured genius, brilliantly conceptualizing, constructing, executing, and maintaining a writing machine...”

Over the decade and 1,392 blog posts, I have bungled grammatically, spelled wrongly, contradicted myself, have been factually wrong, rushed to judgement, generalized on inadequate data points, been afraid of cultural, social and political vigilante, have been highly subjective, showed impatience....but, well, that has been the story of my life too! Needless to say, over the same period, my views, tastes, passions, likes, dislikes, physical abilities, libido- all have changed...

Although the page-views count of the blog has grown exponentially, I don't know how many real people have visited the blog...comments have been sporadic...but I have not really bothered because I have primarily written the blog for myself...it has been a kind of therapeutic process after the death of my mother in January 2006...On second or third day after her passing, my father, himself a prolific writer, asked me: Why don't you do something?...This blog is a kind of my feeble response.


Vasant Sarwate (वसंत सरवटे) was the first person who encouraged me very early on to continue my endeavor.. (he telephoned me just for that)...there have been a few more- including Marathi dailies Loksatta (लोकसत्ता) and Lokmat (लोकमत)- since then...Another person who has encouraged me all along is Mangesh Nabar (मंगेश नाबर).

The layout of this blog was quite awful, even after Blogger software underwent huge changes. Avadhoot Dongare (अवधूत डोंगरे) helped me change it to the format you see today. I have always found Avadhoot's feedback, even on the contents of this blog, useful.

I added the following cartoon to the first post on this blog sometime in 2007: 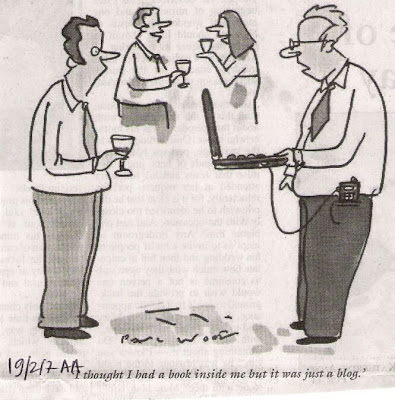 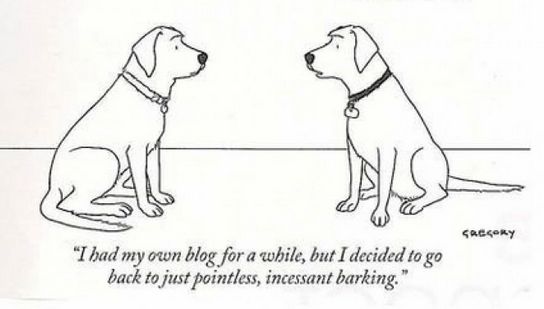 
When I wrote a post on a website that largely has contributions written in Marathi (मराठी), there was a comment that my writing was a kind of 'farm of emptiness' (वायफळाचा मळा).

However, there is a small consolation. A title of a book by one of the greatest Marathi writers, C V Joshi (चिं. वि. जोशी) is: 'वायफळाचा मळा'!

How long will I go on before I decide to go back to barking? As long as I enjoy it, afford it, has physical ability to do it and, above all, Google Inc. permits it.