Damn Hampi, You are in Karnataka!

A.G. NOORANI:"...Television has simply run amok. It is unaccountable because there is no audit of the media in the media itself..."

Last few days Marathi TV channels were busy bashing Karnataka over Belgaum. It's their way of celebrating 50th anniversary of birth of modern state of Maharashtra.

Today May 4th is 674th anniversary of the foundation of Vijayanagara, one of the greatest empires of India and the world.

One of the most memorable days of my life is the one I spent at Hampi-Vijayanagara in December 1992.

It seems I never left the place.

When I saw the picture of elephant stables, included below, from Frontline April 9 2010 essay 'History in stone', I once again, just like the day when I was there, was transported 500 years back.

"...meets some fragments huge, and stops to guess
What powerful but unrecorded race
Once dwelt in that annihilated place." (Fortunately for us not exactly 'unrecorded race'.)

Year 2010 is 500th anniversary year of the coronation of Krishnadevaraya, one of the greatest rulers India produced.

I don't claim that I read a lot of Marathi publications or follow Marathi news television. But I dare say that this great event is barely being celebrated in Maharashtra.

Year 1936 was celebrated in Maharashtra as 600th anniversary year of foundation of Vijayanagara empire.

"...The idea of Maharashtra state came to Shivaji under the shadow of Vijayanagara empire; it was developed further while he conquered parts of that erstwhile empire; it germinated because of its support; prospered; survived many crises, kept going and in the end when that support vanished, it fell apart."

Are we ungrateful bastards? 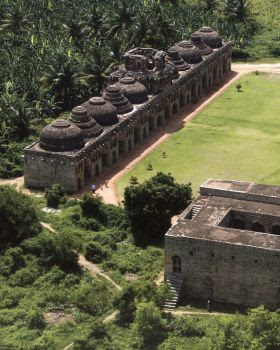 If you pay attention, you will hear elephants trumpet
Posted by Aniruddha G. Kulkarni at 9:00 AM

I may not agree what you wrote in this post, but it recalled my memories of visit to hampi. Regrads.
Mangesh Nabar