Economic & Political Weekly: The gladiatorial spectacle of IPL has brought the worst of our economic and cultural life to the open. (April 17-23, 2010)

The new IPL team 'Sahara Pune Warriors' unveiled the name and logo of its franchise at a grand ceremony in Pune on Saturday April 24 2010.

As expected, the logo- embedded below- is gladiatorial. But does it look good?

"...a coloured fluttering flag used to be attached to the spear; because of that the sight of shining tip of the spear in daylight along with fluttering flag looked graceful from a distance..." Panipat 1761, 1961.

When I first read this description, I closed the book and tried to imagine that spectacle. The process was exhilarating.

Has the logo captured even a tiny fraction of Shejwalkar's poetic description?

What would have an artist like D G Godse (द ग गोडसे)- who once worked for an advertising agency- done with the idea? 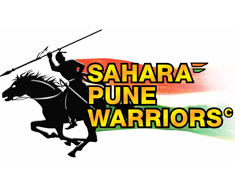