Until recently we had Vijay Tendulkar (विजय तेंडुलकर) who created 'Ghashiram Kotwal' (घाशीराम कोतवाल) in 1972 to show what havoc totalitarianism wreaks on civil society and how the government of the day creates and encourages such forces for self preservation.

(btw- Nana Phadanvis (नाना फडणवीस) 1742-1800 'the government of the day' in 'Ghashiram', adjusted for inflation, was probably as wealthy as the richest politician of Maharashtra today.)

Since 1993, terrorism has joined totalitarianism in Maharashtra.

Where do we stand today?

"...Today if a Marathi speaker goes to any other part of India, he would feel embarrassed. Other Indians get a picture of Maharashtra where only rowdyism, bullyism, gangsterism, terrorism and uncontrolled land-grabbing is going on. Earlier the images that were evoked when the word 'Bihar' was pronounced are now evoked by the word 'Maharashtra'..."

Is this all reflected in Marathi literature?

Sure, there have been few attempts but nothing is even close to 'Ghashiram Kotwal' let alone Conrad's writings. (G A Kulkarni जी. ए. कुलकर्णी 1923-1987 was inspired by Conrad. But he didn't write any 'political' stuff.)

Conrad is our contemporary because, almost alone among 19th- and 20th-century novelists, he writes of the realities in which we live. At bottom, we know the dilemmas we face are not wholly soluble; but we prefer not to dwell on that. In order to avoid ethnic and religious enmities interacting with the rising scarcity of oil, water and other necessities, we need a worldwide programme of restraint and conservation; but such a programme is difficult to imagine at the best of times, and impossible while crucial regions of the world are at war. The realistic prospect is that the most we can do is stave off disaster - a task that demands stoicism and fortitude, not the utopian imagination. Which other novelist can school us so well in these forgotten virtues?

Conrad's greatness is that, by an art of enchantment, he brings us back to our actual life...

...It falls to a novelist without much faith in the power of reason to enlighten us how to live reasonably in these circumstances..." 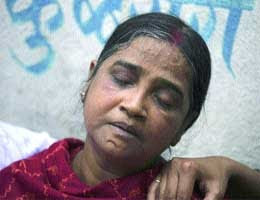 February 15 2010; Location: Outside of Morgue of Sassoon Hospital, Pune
Posted by Aniruddha G. Kulkarni at 9:00 AM

My late dad though used to tell me what the British said about Nana, (wonder why they used Dakhani?)

Also you write about Nana as one who was as rich as today's politicians, I wonder whether even the devil deserves to be compared with today's politicians, let alone Nana. Have you heard them spending a paise for any public work? My town Khopoli has a tank, for details about the tank see the article on Khopoli at Wikipedia. This tank according to Gazette records was built by Nana from his private income, it is a huge tank, and serves Khopoli to this date.

I have already said a couple of things on Nana.

He was as devilish as some of today's worst politicians who belong to all major parties of Maharashtra.

Glad to hear about the water tank.

Maybe Nana was doing atonement for his sins.