T C A Srinivasa-Raghavan, April 2017:
“In 2006 a British writer called William Dalrymple rummaged in the unpublished and hitherto ignored private papers about the revolt of 1857. They were in Urdu. So he took the help of Mahmood Farooqui to translate them. He then published a book called The Last Mughal.
That book exposed a serious weakness amongst Indian historians who, in their quest for certification from Oxford and Cambridge, were content to adopt colonial lenses. In this scheme of things British rule was the best thing that happened to India. Many Indians still think so. Fortunately their numbers are shrinking.

From the 1960s onwards, Oxbridge steered Indian students towards a study of the freedom movement. In this view, the main villains were the Indians themselves. The divide-and-rule aspect of British policy was mentioned only in passing...

...Now, gradually, things have begun to change. Indian historians are beginning to show how the Oxbridge version was actually an “alternate truth” — post truth plus alternate facts. This is beginning to show how there can be entirely different versions and interpretations of events.
They are doing so by re-examining the many different aspects of 1857-1947. An altogether different picture of British rule emerges when these stories get told by un-colonised Indian minds...”


“...It was this lack of development that is probably the most difficult legacy of the Raj to justify. Unpopular as it was when a much-respected ICS officer and Indian historian, W. H. Moreland, produced the figures, the average Indian income per head in 1932 was shown to be the same as it had been in 1605 under Akbar. When compared to the comparable growth in the quality of life in Great Britain, and allowing for relative increases in population, India had stood still. The English population had in fact increased eight times over the period while India’s had increased just under four times but per capita GDP in Great Britain had grown six times.38 Even as late as 1944 half the population of India was under twenty years old, which is a damning comment on the lack of improvement in life expectancy under the Raj....

... Part of the problem was that the Indian government had an inadequate economic planning capacity. The senior ICS men who staffed the viceroy’s ministries had been trained on tour in the provinces, assessing land disputes or bringing troublesome border tribes to order. They had little notion of making capital available to fund development or of how to increase industrialisation and they did not really think it was their job to do so anyway. By 1931 there were only three industries employing more than 200,000 people: jute, cotton and coal mining, and still only 9,206 factories across the whole of India. Many of these were in the Princely states where the rulers were more sensitive to the importance of financial incentives and tax breaks. S. Moolgaonkar, a Tata executive, recalled that virtually the entire cement industry was located in the Princely states as the Indian government would not give it any financial support in the British provinces, something he, like many, ascribed to a desire to protect imported cement supplies from Britain. ‘The Brits imported everything’, he complained, ‘even the man hole covers’...” 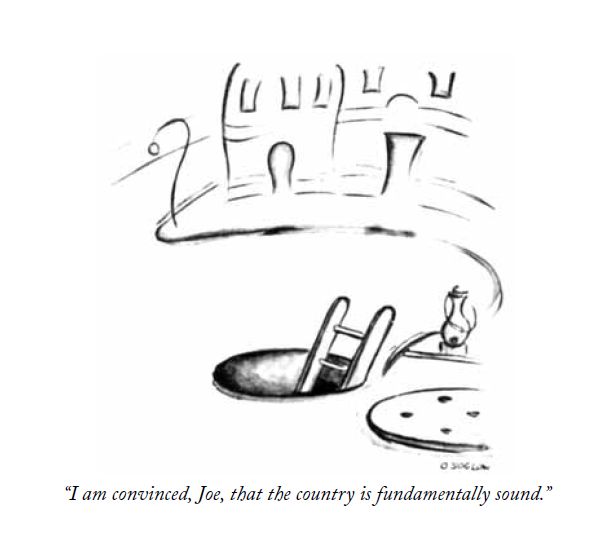 Well, Mr. Soglow, America was perhaps fundamentally sound but India had gone to the dogs in 1931, thanks to the British Raj!
Posted by Aniruddha G. Kulkarni at 9:00 AM