"Despite pledges to protect South Vietnam, former US President Richard Nixon privately vowed to "cut off the head" of its leader-Nguyen Van Thieu-unless he backed peace with the Communist North, tapes released on Tuesday showed..."

One more fan of severed head.

The Sri Lankan military has released pictures of Tamil Tiger leader Velupillai Prabhakaran which it says prove conclusively that he is dead.

Those parental-guidance-suggested pictures are insufferable.

‘Severed-heads’ have always been with us. They brought another sorry episode from history to my mind.

In December 1760, Atai Khan, working on the orders of Ahmad Shah Abdali severed the head of sixty-plus years old Govind Ballal Kher aka Govind Pant Bundela, a Subedar of Maratha, and sent it to his boss- Abdali.

Abdali 'presented’ it to the head of Maratha army, Sadashivrao Bhau. This act surely dented the morale of Maratha army badly. On January 14, 1761, it was trounced in the third battle of Panipat, a sort of Vietnam of Maratha empire.

On May 19, 2009, the Sri Lankan military was adjusting the corpse for cameras to photograph the head that looked severely damaged, if not almost severed. 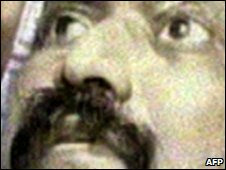 thanks anon for your kind words