I have read a few film reviews of Mr. Ebert. In recent years, I have used them to decide whether to watch a film or not. (By the way- I was mildly surprised to see some Marathi newspapers reporting passing of Mr. Ebert. I wonder if any of them has ever printed a translation of his review.)

Mostly,  I have benefited from his advice.

I like what Maureen Dowd wrote about him  in The New York Times in September 2011:

He asserts that “modern actors are handicapped by the fact that their films are shot in color” rather than the more mysterious black and white. “Peter Lorre and Sydney Greenstreet are, and will remain, more memorable than most of today’s superstars with their multimillion-dollar paychecks,” he writes.

He complains that his life “has been devoted in such large part to films of -worthlessness.”
“Hollywood dialogue was once witty, intelligent, ironic, poetic, musical,” he says. “Today it is flat.” He mourns that “it sometimes seems as if the movies are more mediocre than ever, more craven and cowardly, more skillfully manufactured to pander to the lowest tastes instead of educating them.”..."

..."it sometimes seems as if the movies are more mediocre than ever, more craven and cowardly, more skillfully manufactured to pander to the lowest tastes instead of educating them" is more true of Hindi films than Hollywood ones.

(Marathi films are slightly different. Ideas behind some of them are good but the final product that comes out on the screen- cinema-  is mediocre.  Marathi news TV, newspapers and people involved with the film try talking it up but it does not work for me. You don't laugh while promoting a comedy. No sermonising on your own love, happy marriage will help. It has to come from within of the watcher while watching your film.)

But I like another side of  the late Mr. Ebert more: a New Yorker  cartoon caption contestant. He won the contest after failing at 107 of them earlier.

Bob Mankoff has written about this on his blog in April 2011 and now after Mr. Ebert's death.

Following is one of Mr. Ebert's failed attempt and, it was a failure only because of the 'Caption Contest Board of Censors' at the New Yorker.

(I wonder why it was not sent to Playboy. Playboy has published some great cartoons. Marathi Diwali magazine Awaaz would have probably published it.)

This picture lifted my spirit as much as the tray on that plane! I have not traveled on a plane since I saw this. If and when I do, I will remember this. 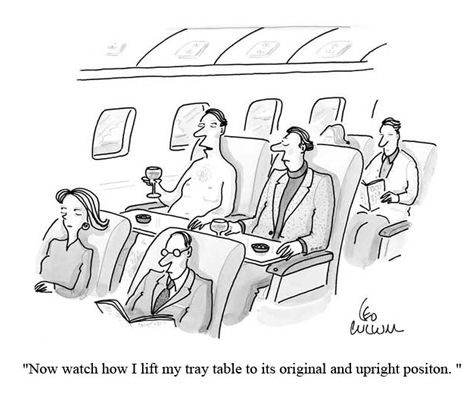