John Gray: "...To be sure, the pursuit of self-realisation does not often result in happiness. But is it happiness that most people are pursuing? Or is it stimulus and excitement?..."

It is now clear, going by the most reviews, that Tim Burton's film 'Alice in Wonderland' has screwed up Lewis Carroll's 'Alice's Adventures in Wonderland'.

But Mr. Burton like all of us has been affected by Disneyfication of everything around us.

"...The only way to understand Alice is to use your imagination. Do you even remember how to do that? In our society of Web links, Wikipedia, Facebook, and reality TV, everything and everybody comes with a label and an exhaustive definition. There's scant room for ambiguity and interpretation. The genius of the 145-year-old Wonderland is that it forces you to bring your own creative juices to the tea party...

...In short, the story is a metaphor for how Alice uses her imagination to quench her boredom; Carroll says her favorite phrase is "let's pretend." What she also does is remind us how little we do that anymore..."

Lewis Carroll handpicked the accomplished illustrator John Tenniel to draw pictures of Alice for his story. His images were often simple and vague, so you could bring your own imagination to the tea party.

Here is an example: 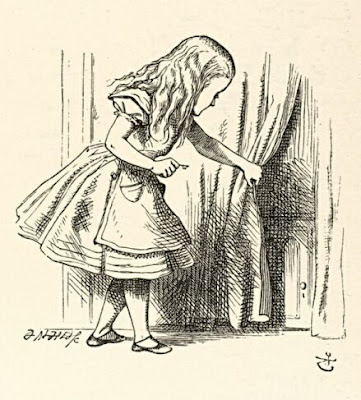 He and I spoke on Joshi's work. Sarwate told me how he tried to meet Joshi in Joshi's home-town Baroda. We also speculated how little money would probably have come to Joshi for this work.

I feel, in following picture, Joshi has tried hard to motivate us to bring our imagination along with our appetite to the lunch! 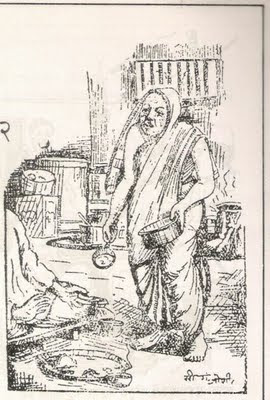 Do you have copy writer for so good articles? If so please give me contacts, because this really rocks! :)

Thanks for your kind words.

Anonymous has left a new comment on your post "S G Joshi, John Tenniel: The Power of Simple and V...":

Dear Aniruddha,
I endorse what Shri.Abhinav commented in his "kind words". Your posts are unique. No one nowadays knows or is bothered to know about S.G.Joshi.
Regards,
Mangesh Nabar

We all stand on the shoulders of giants.

I'm looking forward to getting more information about this topic, don't worry about negative opinions.