The Times of India October 21 2009: 'Maharashtra fast turning into a right-wing terror hub'

In March 2009, it was reported: The Tokyo publisher East Press is launching a series of 28 manga versions of important European and Japanese literature. Dostoyevsky is among the bestsellers, along with Dante, Kafka and Hitler’s Mein Kampf.

From time to time, many prominent people in Maharashtra espouse the cause of dictatorship. They want a blank slate once again.

Therefore, it's no surprise that Adolf Hitler's 'Mein Kampf' sells well in Maharashtra. In most book exhibitions at Pune, I find it displayed.

My father's maternal uncle was a big fan of the Führer. Apparently he had a large picture of Hitler hung in his room at his Sadashiv Peth, Pune home during the World War II.

The Times of India reported on February 1 2009:

"...The Fuhrer's political manifesto, Mein Kampf (My Struggle) is a well-thumbed book in India even though it is banned in many European countries...

...It's well-documented that early Hindu nationalists such as Vinayak Savarkar and Madhav Sadashiv Golwalkar were deeply impressed by Nazi ideology.

Their political descendants, including the BJP's L K Advani and the Shiv Sena's Bal Thackeray, have publicly referred to Hitler's ideas and strategy...

'If they grow stronger they can play the part of Sudeten Germans, alright. But if we Hindus in India grow stronger, in time these Muslim friends of the league type will have to play the part of German-Jews instead. We Hindus have taught the Shakas and the Huns already to play that part pretty well. So, it is no use bandying words till the test comes. The taste of the pudding is in its eating.': V D Savarkar, Hindutva ideologue, in Hindu Rashtra Darshan, 1949

'If you take Mein Kampf and if you remove the word Jew and put in the word Muslim, that is what I believe in.': Bal Thackeray, Shiv Sena leader, quoted by Mumbai newspapers before the 1992 riots

L K Advani's prison diary, based on his days of confinement during the Emergency, has frequent references to Hitler's Mein Kampf. He compares fascism with the 'draconian laws' that Indira Gandhi had imposed on the nation during the Emergency in 1975. Advani's book has a specific section titled 'Anatomy of Fascism'. The book also has references to other fascists like Mussolini of Italy and Franco of Spain."

"...a comic version of Nazi dictator Adolf Hitler's notorious political manifesto has become a hit in Japan - with sales of 45,000 copies since last November.

The manga book describes both Hitler's autobiography and his infamous Nazi manifesto in the unlikely form of easy-to-read comic pictures and captions..."

Bal Thackeray was a cartoonist first before he became a politician. Therefore, he may appreciate Manga Mein Kampf even more.

For an accomplished graphic artist like him, it may be even easy to substitute the pictures of Jews with Muslims! 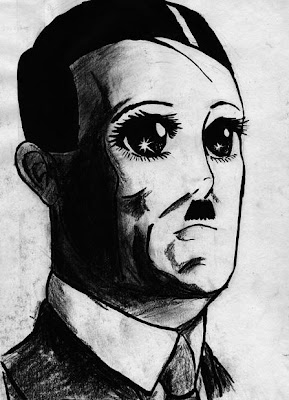