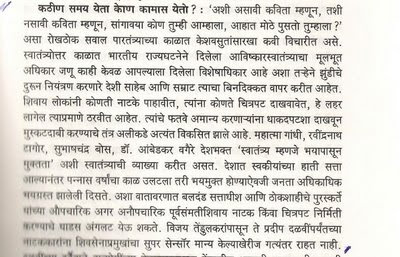 "...even though fifty years have passed since natives have taken power, instead of becoming fearless, people feel increasingly terrified..."

अखिल भारतीय मराठी साहित्य संमेलन All India Marathi Sahitya Sammelan has little to do with मराठी Marathi literature but, like elections, has everything to do with entertainment.

Therefore, I like it to continue every year until I die.

This year डॉ. आनंद यादव (Dr. Anand Yadav) first 'withdrew' (for the first time in the entire history of books?) his book-'संतसूर्य तुकाराम' (Saint-Sun Tukaram) and then gave up his chair of presidency.

Yadav got lucky. Neither his house was burnt. Nor was he lynched.

If he were a Brahmin and had written about Shivaji शिवाजी the way he did about Tukaram, he (along with Brahmins like me) would be pushing the luck too far.

For Prospect Magazine April 2009, Kenan Malik has talked to Hanif Kureishi about the Rushdie fatwa and why no one would write such a book today.

‘“Nobody,” Kureishi suggests, “would have the balls today to write The Satanic Verses, let alone publish it. Writing is now timid because writers are now terrified.”…

Despite Kureishi’s brush with Islamism, he never saw The Satanic Verses controversy coming. “I first read The Satanic Verses in proof copy. I didn’t notice anything about it that might rouse the fundamentalists. I saw it as a book about psychosis, about newness and change. The 1980s was an age of fusion—in music, in food, in literature. The Satanic Verses was part of that postmodern fusion.” Even when the protests began, he didn’t take them seriously…

Kureishi does not even remember the book-burning. “It didn’t register,” he says. “Only with the fatwa did it become clear how serious and dangerous it was. It seemed mad to imagine that someone could be killed over a book. I was flabbergasted. How could a community that I identified with turn against a writer who was one of its most articulate voices?”

The Rushdie affair, Kureishi believes, transformed not just his own work, but also “the very notion of writing.” The fatwa “created a climate of terror and fear. Writers had to think about what they were writing in a way they never had to before. Free speech became an issue as it had not been before. Liberals had to take a stand, to defend an ideology they had not really had to think about before.” How have they borne up to the task? “The attacks on Rushdie showed that words can be dangerous. They also showed why critical thought is more important than ever, why blasphemy and immorality and insult need protection. But most people, most writers, want to keep their heads down, live a quiet life. They don’t want a bomb in the letterbox. They have succumbed to the fear.”’
Posted by Aniruddha G. Kulkarni at 9:00 AM

Your post is commendable. What I liked the most was,
"अखिल भारतीय मराठी साहित्य संमेलन All India Marathi Sahitya Sammelan has little to do with मराठी Marathi literature but, like elections, has everything to do with entertainment.

Therefore, I like it to continue every year until I die.

This year डॉ. आनंद यादव (Dr. Anand Yadav) first 'withdrew' (for the first time in the entire history of books?) his book-'संतसूर्य तुकाराम' (Saint-Sun Tukaram) and then gave up his chair of presidency.

Yadav got lucky. Neither his house was burnt. Nor was he lynched."

Thank you, Aniruddha. You should have sent this to Sadhana or Loksataa in Marathi.
Mangesh Nabar