Do We Realise the Enormity of the Loss of Buddha?

For a long time, I didn't know what Swami Vivekananda said beyond "Sisters and Brothers of America" at the World's Parliament of Religions, Chicago 11th September, 1893!

During the speech he said:

"...At the present day there is not one who calls oneself a Buddhist in India, the land of its birth.

But at the same time, Brahminism lost something — that reforming zeal, that wonderful sympathy and charity for everybody, that wonderful heaven which Buddhism had brought to the masses and which had rendered Indian society so great that a Greek historian who wrote about India of that time was led to say that no Hindu was known to tell an untruth and no Hindu woman was known to be unchaste..."

Arvind Subramanian: "The only real export from India that is said to have wider impact, according to (Ian) Morris (author of 'Why the West Rules — for Now: The Patterns of History, and What They Reveal About the Future'), is Buddhism." (Business Standard, December 22 2010)

"...Far from being Ramjanmabhoomi, or even an important Hindu place before the 18th century, Ayodhya figures in history as a holy place for Buddhists and Jains.

For Buddhists it was a capital of Kosal or Saket, where Buddha had actually resided. In the seventh century, Hsien Tsang records it as mainly a Buddhist place, having 100 Buddhist monasteries and 3,000 Buddhist monks, with a very small population belonging to other faiths.

From the eighth to the ninth century, the revivalist wave of Brahmanism overwhelmed Buddhism, and began forcibly converting Buddhist vihars and temples into Hindu temples. This has happened all over the country and Buddhism, the dominant religion for nearly a millennium, was literally wiped out from the land of its birth.

Historically speaking, it may be truer to say that Hindu temples were built either by destroying or converting Buddhist temples than Muslim mosques built by destroying Hindu temples. As against the Hindutva claim of 30,000 temples being destroyed to build mosques, American researcher Richard Eaton found no more than 80 temples that were so destroyed. In fact, Muslim hordes had destroyed many Buddhist temples, taking them to be anti-Islamic places of idol worship, to the extent that but, the word for idol in Arabic, is said to have come from Buddha..."

(btw- Will Buddhists in future claim their right to Lenyadri temple? Evidence favours them so overwhelmingly that no court probably can deny them.) 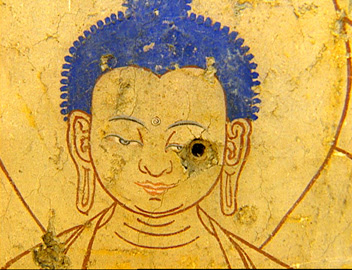 A fresco of Buddha defaced by a bullet at a temple in central Tibet
Posted by Aniruddha G. Kulkarni at 9:00 AM 11 comments: